The ability of the disparate Partisan forces to communicate and coordinate in spite of the exhaustive blockade efforts was a constant source of frustration to the forces of the Pentarchy – and particularly to Master Enoch and Gorn, Chapter Master of the Charnel Guard. Whatever measures and cordons they enacts, it never seemed to be tight enough – the Partisans remained able to communicate and organise both their military operations, while also mounting ongoing diplomatic missions to the governors of key worlds across the Morqub and Heliopolis sector.
While these surprising capabilities were often attributed to the mystery of Volnoscere's own aura, it is clear he was able to tap the considerable abilities of notable figures to keep these diverse communications channels open. Dionysius Maro, a psyker and non-Astartes Kapihe, is regarded as one such asset – perhaps one of the most notable.
***
An encrypted intelligence report, supposedly commissioned by Enoch and enacted by the Vigilants of Killteam Brighteye, was retrieved by the Sister of Silence during the post-war clean-up from a sumphulk on the minor world of Obreia. While it is possible the report was a plant by Mendicant operatives, on the face of things it seems broadly clear. The report was heavily redacted.

[...]Maro's precise origins are unclear, but genetattoo analysis from his spoor imply membership or filial blood of the Navigator House Pulox. [...] Capable not only of navigation in the warp, Maro has demonstrated considerable telepathic capabilities – perhaps even comparable to a true astropath: a figure of rare power and control indeed. Through his career he rose among the ranks of House Pulox and built a considerable network of business and diplomatic contacts in the [...]

[...]We cannot yet establish how he came to be in Voloscere's orbit, but his considerable abilities have proven a tremendous asset to the Partisans. He has been implied in at least four Partisan fleet deployments during the 'Primarch's' Operation Gauntlet, and proven capable of leveraging little-known and little-used warp routes to great success. [REF[REDACTED]. The diplomatic channels thus built and [...]maintained Partisan support even in the face of the Pentarchy's blockade.

[...]Our current suspicion is that Maro has been able to leverage his network to learn of developments on Terra, sources that were only extinguished in the wake of [REDACTED] operation and the subsequent private trial and execution of Erdga Solomun.[...]

***
Owing to his capabilities, Maro did not need to be at Volnoscere's side to advise him, and he frequently travelled on various missions through the war. His importance is underscored by his habitually being accompanied by a force of Silver Stars ranging from a demi-squad to a Company or more, with armour and other heavy assets.
As was the way with the mercurial pseudolegion, Maro's escort – infamously known to their Pentarchy opponents as Bismuth Company – would at times switch from engaging in diplomacy to direct military action in support of the Partisan cause. This has repeatedly be claimed as further evidence for just how far Maro's unique abilities were valued and employed by Volnoscere's sons and the forces who supported them.
[//incidental sub-log invite{REQUEST}: Fawcett Aveneue Conscripts+]
***

The initial appearance of the Silver Stars in the region is generally regarded as mysterious and sudden – prior to the battle of Hong Qi, there are no records of the Pseudolegion, and traces remain scanty even after that. However, the Inquisitor Austine d'Arby pieced together a convincing argument through a series of unusual – and arguably heretical – practices that allowed her to implicate the legion and its agents in a number of abductions and covert military missions in the years prior to the start of the war.
The target of these raids, d'Arby claimed, was almost invariably astropathic choirs and navigatorial staff.  According to the Inquisitor, this was further borne out by the following circumstantial evidence:
Indeed, d'Arby's suspicions were such that she was able to petition the Imperial Navy to lay a trap based on these observations in the very earliest part of the war: the ambush around Acylus that became known as The Methuselan Affair. Here, a convoy of House Methuselan Navigators were used as bait to draw in the Silver Stars' fleet (later revealed to be a relatively small subsection of the Pseudolegion's strength). They walk into an ambush headed by the Pentarchy of Blood, who routed the Silver Stars and their allies; the Jade Talons and Marines Saturnine.
Unfortunately for the Orthodoxy, d'Arby herself was persecuted and sidelined by the monomaniacal Master Enoch on his arrival in-sector, and she was despatched to oversee the deployment of the Death Eagles II in the mid period of the war, her acute observations forgotten and languishing.
***
Whatever the cause or reason, it became abundantly clear that the False Primarch was attempting to gather as many navigators and astropaths as he could. This caused acute shortages for the Orthodox forces in the mid to late periods of the war. As a result, with the exception of the Pentarchy themselves, who enjoyed preferential treatment, most Orthodox forces were largely forced onto the defensive
The reasons for this never became clear, but it may simply have been a strategy pursued by the Primarch prior to the war itself. Not even a Legion could expect to pacify a Sector, but knowing that he intended to invade Heliopolis, Volnoscere's actions are sometimes interpreted as an attempt to strangle inter-system communication and force each planet to stand on its own.
While this was certainly successful, however, there are a number of alternative theories; some of which conflate the importance of the Navigators and Astropaths, others of which imply one was simply a means to the end of gathering the other. A number of religious interpretations – both pro- and anti-partisan – suggest Volnoscere was attempting to silence humanity's communication; while military operators tended to favour a simple strategy of obfuscation and delay by breaking lines of communication and travel – or gathering the means to establish an effective and speedy expansion from Heliopolis should they prove successful.
From intercepted communications between the Quadrargenta late in Operation Gauntlet, it appears that the 'Primarch' did not fully share his plan even with his most trusted lieutenants – to some discontent from the Partisan Chapter Masters.
Finally, and perhaps most tantalisingly, the records of the Navis Nobilitae in the Navigator's Quarter on Terra supposedly contain information that has never been released or made available to the Inquisition. Obscure hints imply that there was an entirely more metaphysical reason for Volnoscere's gathering of Astropaths and Navigators... 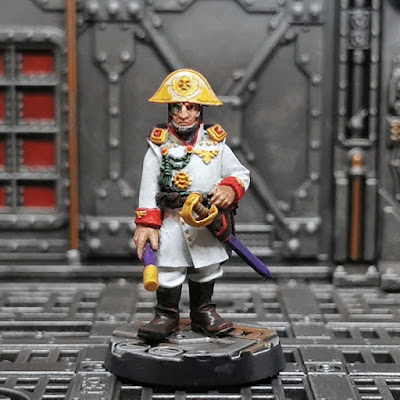 Lord Admiral Ludovico Martegiani  [//patrick_w/@auxiliarymirelurk+] 'I lived in the knowledge that the Emperor would find me wanting until the day I died. So I fought for him every day as though it were my last.' [//Inscription on the grave of Lord Admiral Ludovico Martegiani+] *** Lord Admiral Ludovico Martegiani was born a scion of one of the many minor branches of the ducal House of Primorye. Without a chance of a meaningful inheritance he was sent to the naval academy on Kar Duniash, there to be swiftly forgotten by his squabbling relatives. After an unremarkable academic career he was commissioned as a junior lieutenant to the cruiser Torch of Truth . Fighting pirates, orks and renegades, he slowly rose through the ranks; the only thing separating him from his peers being his burning faith in the godliness of the Emperor.  He would have been little more than an obscure sidenote on the Imperial Navy's roll of duty, were it not for a chance meeting with Master Enoch sho 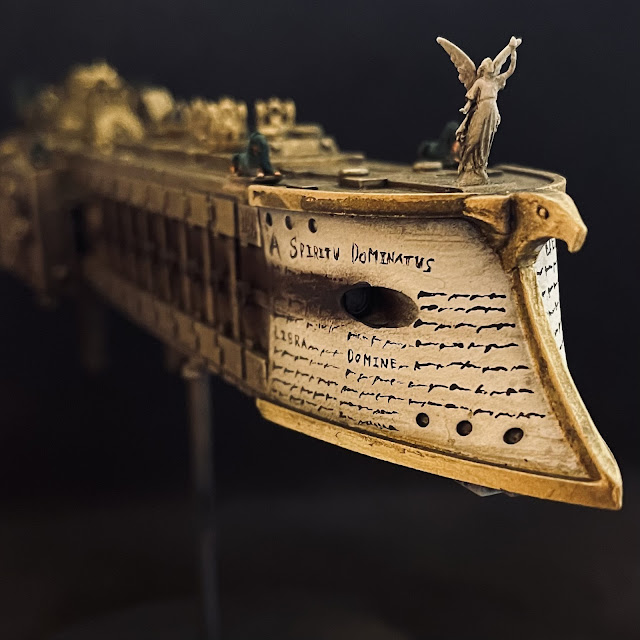 The Ecclesiarch's Arrival [//Dominatus Imperator, the Ecclesiarchy's flagship; upon whom Benedin II was transported to Heliopolis+] [//oli_n/@magos_nexnbo+] *** 'Holy, holy, holy is the mystery of the Emperor's Death-in-life.' 'Infamy, indiginity and woe upon he that seeks to betray the Emperor's new life to His people. Who is this Abomination, that he would draw back a much-needed veil? Ignorance must be preserved. Bear me thence, and we shall smother this dangerous fireband.' 'Obedience is the child of Faith, which is borne of mother mystery. Blessed are the unquestioning.' [//Eccelsiarch Benedin II+] *** [//oli_n/@magos_nexnbo+] Sentence : Pain-halo.    Term : Permanent.    *** Penitent Tool of His holy purpose and bearer of His voice [//Church of the Benighted Pilgrimage, Morgant: Subsector Abraxas+] The silence was broken by the tortuous sound of metal scraping across marble.  A glimmer of candlelight spilled over the cracked flooring, catch