Update from the Front: Echoes of Donias

[//Princip. belligerents={Orthodox alliance}//] +Death Eagles (I); Charnel Guard; Flesh Eaters+]
[//Princip. belligerents={Partisan}//] +Inheritors; Silver Stars; Red Fish+]
Involving more than four Thousand Astartes, the Battle for Orlando was one of the larger campaigns of the mid war. Orlando was a rich and cultured world in the Donias system, and identified as a key target by the Chapter Masters of the Red Fish and Inheritors. They intended to fortify the system and use its wealth to establish a Partisan naval base to control the Abraxas Subsector.
The Pentarchy resisted in force, Chapter Master Tywin Dwimmerlock leading the staunch and prepared defences against the Silver Stars' vanguard force. An estimated 1,700 Silver Stars perished in the infamous Battle of Ghast Canyon, but the Pseudolegion's sacrifice succeeded in driving the furious Charnel Guard and Flesh Eaters back. Some three months later, Dwimmerlock enacted an ordered retreat, judging his winnowing campaign a great success.
***

He found the body of the Silver Star amongst the dust and debris of the Manufactorum. A melta blast had blown an immense hole straight through the Space Marine's abdomen, fusing the surrounding flesh and ceramite into a single, blackened mass. Both legs and hands had been sheared away, leaving smoking stumps at the wrists and knees. The sickening smell of burnt meat and molten metal hung in the air, filling his helmet's respirator.

And yet somehow, against all logic and expectation, the enemy warrior still lived. Through the shattered face plate of the Crusade pattern helm, bloodshot eyes glared up at Aleksandr with unbridled hate. Despite the ruination of his body, the Silver Star's transhuman physiology was refusing to accept defeat. It was a fighting a losing battle, the Death Eagle thought to himself.
A Land Speeder screamed past overhead, bearing the same distinctive magenta and white livery as his own armour. Aleksandr raised the immense power glove on his right arm in salute, curtly acknowledging the pilot and gunner as they sped towards the front lines. His attention, however, remained focused on the stricken enemy before him.

"Names are important." The Death Eagle finally broke the silence, still staring impassively at the dying Silver Star. "Even when our lives are spent, and our bones have returned to the dust, our names endure."

"I am Ramon Aleksandr, Ninth of his Name, Thirty-seventh of the Canon. I was not born with this name, but I will die with it, and my deeds and actions will be added to it's legacy for all who follow after me to discover. I will never be forgotten.

But you, cousin... As you fade into the darkness, know this, and despair: no-one will remember you as the pale dawn rises." 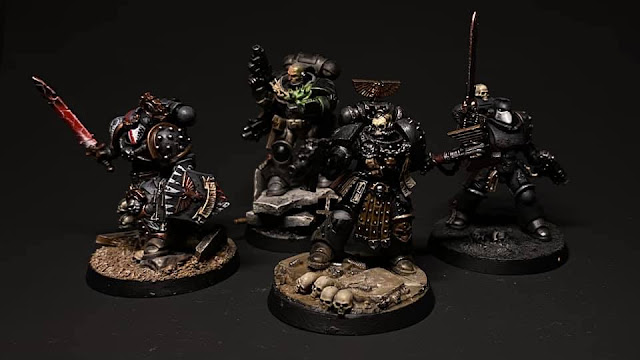 Index Astartes: Carcharadons [//' From the depths, we come for you.' +] [// sinistra ad dextram :paul_h/@the_midnightmare; chris/@the_unbroken_blade; dennis_k/@the_iron_within; joe_a@armageddon_bound+] 'Hysse eyes blacc rollêd in hysse head, and that mouthe devillish broke open... I kennt then that I dead wass in alle likelihode. Prays be! The blessed-Tyrant thenne broke through to my right; and my Masterman crackêd a hammerre over the slat-armoured brute. The discharge of hysse impact blinded me for a moment, made mine teeth ache... I... I kennt not what happened thereafterre. Though heard I a cracc, like the fire of mine las-rifle. I blinking wasse. I must have lost my... Anyway, in my ears I couldde dimmleigh hear the blessed-Tyrant's roar of triumf turn to one of pain, pain most felle. I turned then, and ranne therefrom, and look back I confesse I could notte.' [//Fusilier Boasot, Calydon Garrison.+] Précis 'They emerged from the outer darkness, with no seem 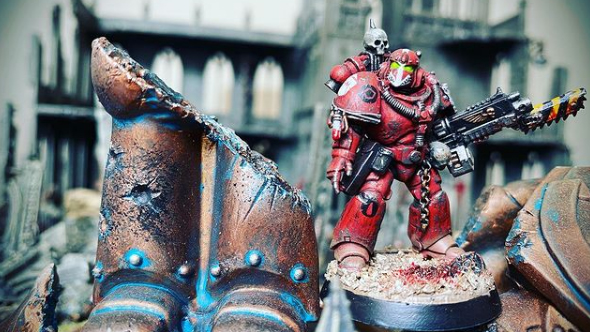 Index Astartes: Flesh Eaters “Every lie you tell, we shall bring truth. Every seed you sow, we shall unearth. Everything you build... we shall tear down.” [//Brother Jael, standing atop a ruined statue of the Abomination Unto Him+] [//paul_h/@the_midnightmare+] *** Precis The name 'Flesh Eaters' is amongst the most feared within the Imperium of Man – owing as much to the fear of the unknown as to their recorded deeds. A shroud of mystery occludes the Chapter, while a reputation of savagery and an undercurrent of bellicosity haunts their name. Mercurial, superior and quick to ire when questioned, reports of torture and cannibalism haunt wherever they make war.  As with all descendants of Sanguinius, the Flesh Eaters bear a face of nobility, but the remnants that are evident in this successor Chapter are notably brittle; a mask that falls away rapidly in times of war.  Such is the fell reputation that precedes them, Planetary Governors and Astra Militarium leaders request aid fro